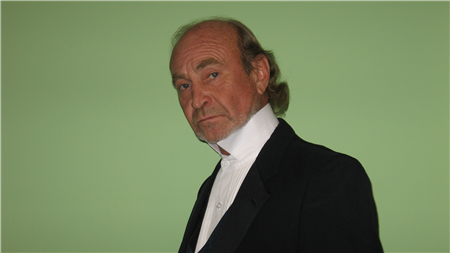 ALEXANDER KALININ (Guest Artist - Russian) was born in Moscow, Russia and began his dancing career at the age of four with his father.  Mr. Kalinin graduated from the prestigious Bolshoi Ballet Academy.  He has performed and toured as a soloist in over 60 countries with the most prestigious dance companies in the former Soviet Union.

After immigrating to the United States in 1981, Mr. Kalinin has performed on stages from New York to Las Vegas, Reno and Australia as well as throughout Southern California.  He has appeared on television including The Tonight Show with Jay Leno, and Life with Bonnie on ABC.  He and his dance troop... have performed for Microsoft founders Bill Gates and Paul Allen.  He regularly performs in Southern California with many ballet companies including recently the role of Sancho Panza in Don Quixote and Carabosse in The Sleeping Beauty with Southland Ballet Academy of Orange County.  He also performs other notable roles with Pacific Festival Ballet and Santa Clarita Ballet among others.

He has taught dance for over 30. Years in the U.S. as well as abroad, including teaching the summer program with ABT for 4 years Irvine CA. The Kirov Ballet Academy – Washington DC .  He is known throughout the world as a teacher and performer of great skill and strength rivaled only by his "feel" for the music.  Kirov students said that Mr. Kalinin gets the students excited about character and brings interesting life experiences to class.  The Reno Gazette Journal praised him as a choreographer able to set new standards in Russian Dance.  Gelsey Kirkland of the New York City Ballet said of him, "Character Dance is greatly needed in this country, and Alexander Kalinin is a true inspiration as an artist and teacher."